Reply: General Role-Playing:: Re: QOTD JAN 19: Have you, as GM, ever retconned elements of a previous adventure? Have you ever experienced retconning as a player?
Posted: Wed, 19 Jan 14:49:40

This is a story that I've told before, so I'll do the short version. I invited a work-friend to a Pendragon (1st - 6th Editions) session, and he decided it would be fun (for him) to ruin things. After he left, I told the group "this never happened." It just had to be done. I could have written a recap that, um, modified what happened, but I had to remove the bitter taste from our collective mouths.

Our usual GM will do small retcons if he made a mistake, and it doesn't completely wreck things. "Krondor, you weren't hit as hard as you thought by the chupacabra. After the session, I realized they only do crits against goats." "The letter from the archaeologist had a P.S. on the back of the letter. I forgot to show you that."

I had to do a few retcons for reasons such as these, but only very rarely.

I think my wife the teacher would tell us that explaining things in multiple ways is important to try to reach people with different learning styles. Examples may help some learners visualize what they've read and others my profit by seeing the rule in action.

Games rarely present things in a visual way. I wonder if that's a source in some of the bias in players. We're not clones by any means, but maybe there's a reason beyond the cultural bias of rpgs that causes so many of the fans to be slightly bookish introverts.

It's the end of an era. One of my go-to game stores in the area, The Compleat Strategist in Falls Church, VA, is closing. For most of this month, they have been selling everything for 50% off (RPG books were 75% off), so I went a week or so ago and bought Strat-O-Matic Baseball 2015 edition and some Castles & Crusades rulebooks. Then I saw that everything left is now 80% off. So I went yesterday and grabbed this haul, for a total of just over $60. 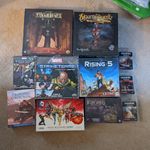 The game at the top left, a Tannhäuser: Operation Novgorod still in shrink, will pay for the entire purchase and probably then some. I already have a copy, so will sell it.

But it's the one at the top right that intrigues me the most. A solo/co-op miniatures game steeped in Irish folklore. I almost pledged for this when it was on KS, and recently almost bought a copy from Miniature Market during its sale. So to find a copy for around $15 was a delight. I think the minis alone make it worth that. 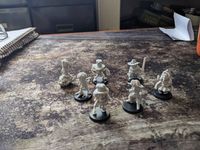 Marvel Strike Teams has been on my radar for a while, and though there is no official solo mode, it looks like one could be made pretty easily. Rising 5: Runes of Asteros is a gamble, as the reviews aren't great, and I grabbed a box of Runewars armored skeletons because you can never have enough skellies. The three expansion decks for Dragonfire were an easy decision, and finally the two at the bottom left, Proving Grounds and DC Comics Deck-Building Game: Heroes Unite were opened and in a pile of games with the sign, "Free." Thanks!